Welcome to the very first and an introductory article on typesetting. If you happened to be from the scientific community, you must have gone through at least one document (maybe in the form of .pdf or a printed paper) which is the result of years of developments in typesetting. If you are from technical/research background, chances are that you have even typeset a document before using something called LaTeX. Let me assure you that LaTeX is neither the beginning nor the end of the entire typesetting ecosystem. In this article, I will provide a brief introduction to what typesetting is and what all modern tools are available for use. Specifically, the most popular members of the TeX family will be introduced, including LaTeX.

Although many people (including the ones who use it one way or the other) do not recognize this but typesetting is an art. Technically it’s defined as the process of arranging various symbols (letters, numbers & special characters) called glyphs on a physical paper or in a digital medium in a way that it is appealing as a reading material. I emphasized on that word “reading” because that’s the key - typesetting aims to produce documents that are pleasant to the human eye. You might ask, “So, what is the big deal here ?”. The answer is a set of (technical) terms/phrases which, I am pretty sure you haven’t even heard of. “Optimal line length”, “Ligatures”, “Italic correction”, “Hyphenation”, “Optimal spacing” etc. which, if not done right, may result in fatigue while reading. Please believe me at this point that there indeed is a science behind deciding what exactly is pleasant to the human eye and what’s not. I will try to illustrate few of them here:

Have a looks at the example above with two lines with identical content but one (top one) produced by a typesetting system and the other one is by a word processor. Did you notice any visual difference ? Let me help you.

There are many more of these. It’s difficult to discuss all of them here. If you are interested, read articles like this by expert typographers. In this article, I would rather focus on the tools available for digital typesetting.

Before we begin, it’s good to have an idea about how exactly these typeset documents are produced digitally. They are achieved by means of some specially crafted file formats:

Digital typesetting and history of TeX :

It all started when this guy, Donald E. Knuth, felt the need of a reliable typesetting system because he had a bad experience with typesetting his book (The art of Computer Programming). Around 1977, while in Stanford, Knuth developed the very first version of TeX - a digital typesetting engine that allows users to describe the content and formatting of a printing material by means of text files and can produce .dvis. TeX (pronounced as tech) is much like a programming language which takes source code as inputs and produces a beautifully typeset document. Although TeX is a turing-complete programming language, it is mostly used as a description language which is flexible enough to describe not only content of the document but also granular formating details. TeX is highly popular in academia because of it’s ability to beautifully typeset mathematical notations and symbols. The core TeX engine uses quite sophisticated algorithms to address problems (the ones I described before like “optimal spacing”, “italic correction” etc.) which makes a document unpleasant to human eye. Although many things are automatic, TeX provides users with granular control over formatting details.

Okay, enough of history and vague descriptions. Let me introduce you to the language of TeX. In case you want to follow along, please install any complete TeX-distribution (MikTeX, TeXLive etc.) and you’ll get all the required tools ready for use. Here’s a simple TeX program (adopted from the TeXBook):

if compiled with the TeX engine

produces a .dvi which when opened with a DVI viewer, will look like this: 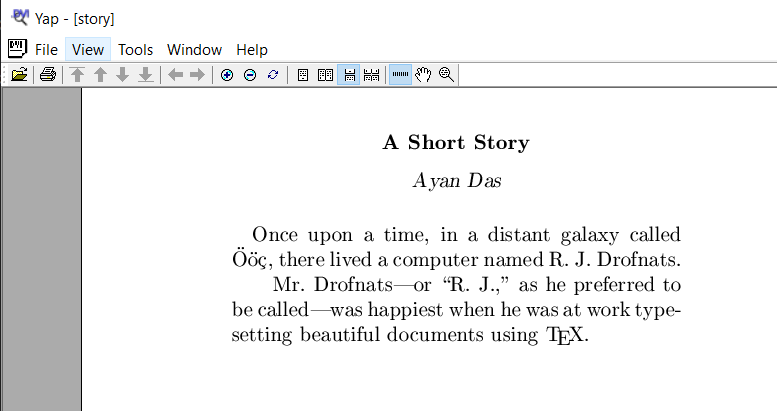 Although, the whole point of this tutorial is not to teach you TeX in detail, but I do want you to get a feel of how TeX accomplishes fine-quality typesetting programmatically. Here goes the explanation of the source code:

I seriously have no intention to make it any longer, but I can’t resist myself to show you the level of granularity TeX offers:

I hope I have successfully conveyed the essence of TeX and the granularity/flexibility it offers. We will now move on to other members of TeX family.

LaTeX : A layer of abstraction

If you have ever heard about or worked with any one member of the TeX family, chances are, it is LaTeX. LaTeX was designed by Leslie B. Lamport (LaTeX happened to be an abbreviation of Lamport TeX) around 1983 as a document management system. It focuses heavily on separating the content from formatting as it helps users to focus more on the content. LaTeX is technically a gigantic macro package of TeX whose primary motive is to provide users with document management capabilities like “Automated page numbering”, “Automatic (sub)section formatting”, “Automatic Table-of-Content generation”, “Easy referencing mechanism” etc. This allows users not to worry about putting proper page numbers every time they create a new page or adding a new entry in the Table-of-Content every time they add a new section in the document.

Plain TeX would require you to do at least this much to produce a numbered list:

whereas LaTeX’s abstraction will allows you to have much more focus on the content rather than formatting details. Here’s how you would do it in LaTeX

Apart from being more readable and content-focused, the LaTeX version is much more feature-complete as it handles all possible situations you might get into. Similarly, (sub-)sectioning is just as easy:

There exist two members of the TeX family, namely pdfTeX and pdfLaTeX, which are essentially similar engines as TeX and LaTeX respectively but produces .pdfs directly instead of .dvis. They may use some modern/advanced features that only PDFs offer. These two are extremely popular as the demand for .pdfs are significantly higher than that of .dvis. pdf(La)TeX is a separate program and implemented independently from (La)TeX. They can accessed via command line programs

A successful attempt of extending the pdfTeX engine by embedding Lua in it was LuaTeX (beware of the spelling, it’s not LuaLaTeX). This engine, if used with the LaTeX format, assumes the name LuaLaTeX. Lua(La)TeX is primarily used when a little more dynamicity/flexibility is required in the source code. Now that we understand how a (La)TeX programs look like and how they work, I will directly go on showing some code rather than beating around the bush.

Before that, I would like to bring your attention to something which (La)TeX is not so good at. La(TeX) is known to be difficult when it comes to general purpose programming. To express very basic logics of programming, TeX needs a lot of unnecessary commands which are neither convenient nor readable as a source code. One very important logical block that almost every sensible program contains is a for loop. Here’s what TeX and LaTeX needs respectively in order to accomplish it.

If interested, you may try to read and understand it line by line. But we can agree on one thing - it’s nowhere near convenient or readable. Although the later one is somewhat easy to interpret, but it takes a separate package (called forloop) to get to it.

You can see the very basic LuaLaTeX command that makes the bridge between LaTeX with Lua is at work here. \directlua enables users to write arbitrary Lua code inside it. Here’s how it works:

Take a moment to digest this. Hopefully the explanation is clear enough to understand why the output looks this this 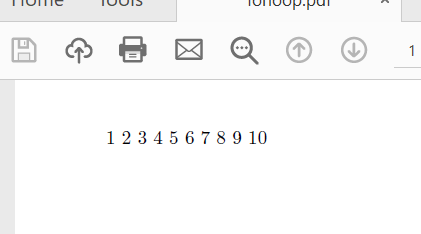 Constructs are available to define pure Lua functions as well. Also, convenient mechanisms are built to translate arguments given to a LaTeX command into equivalent Lua objects. A concrete example is shown below:

The output of the above program, if compiled like this

Phew ! That was a hell of a lengthy tutorial; but hopefully conveys the essence of typesetting and the TeX family of tools. All the members of the TeX family are themselves huge systems to learn about. With the introductory ideas given in this tutorial, it will be easier to read their official documentations available online.